This is the withdrawal notice that Boston College issued Andrew in 1989. This letter is significant, as it serves as proof that Andrew's parents provided him with financial support after he had already dropped out of college.

This directly contradicts Andrew's later claims that his father cut him off after Andrew moved to Boston, and that Andrew never asked his mother for money after he left college. 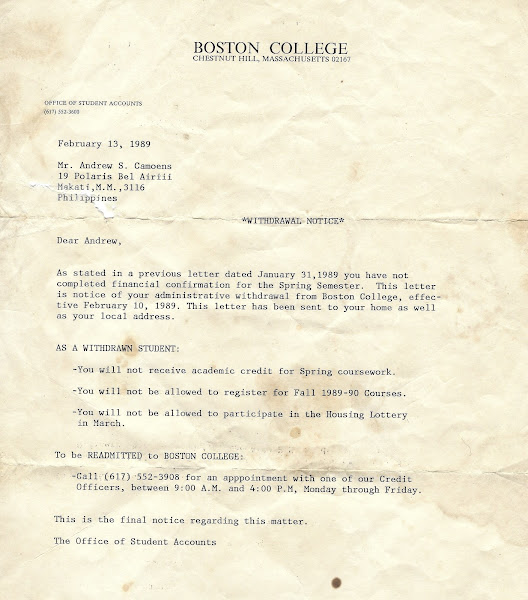 As stated in a previous letter dated January 31, 1989 you have not completed financial confirmation for the Spring Semester. This letter is notice of your administrative withdrawal from Boston College, effective February 10, 1989. This letter has been sent to your home as well as your local address.

AS A WITHDRAWN STUDENT:

-You will not receive academic credit for Spring coursework.

-You will not be allowed to participate in the Housing Lottery in March.

To be READMITTED to BOSTON COLLEGE:

-Call [Phone number] for an appointment with one of our Credit Officers, between 9:00 A.M. and 4:00 P.M, Monday through Friday.

This is the final notice regarding this matter.
at February 13, 1989
Email ThisBlogThis!Share to TwitterShare to FacebookShare to Pinterest